Oxnard–Ventura County Coastal Cleanup Day marked another big win for Oxnard beaches on Saturday, September 17, as volunteers came out ready to get involved.

Friends of the Santa Clara River staged the effort at Fifth and Mandalay Beach Road as the group made their way to the beach, ready to fill their buckets with trash.

Friends of Santa Clara River board member Candice Meneghan said the group historically cleaned up McGrath State Park, which is flooded and closed.

Friends of the Santa Clara River have restored and protected the natural and cultural resources of the watershed for the past 30 years. 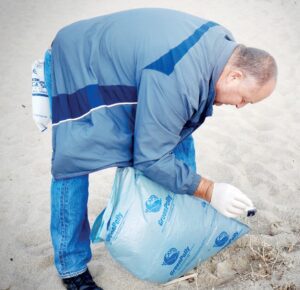 “We do a lot of outreach through an Explore the Coast grant, and the funding comes from Coastal Conservancy,” she said. “We do outreach and education with local school groups. We take them to the settling ponds at the edge of the estuary. We are also involved in the state planning process to upgrade and improve the estuary location as the campground is flooded.

She said the idea is to move the campground and stop the flooding.

“We are in a mega-drought, but because of climate change we have sea level rise,” Meneghan said. “You are touched by all things.”

She said the drought was impacting the flow of rivers, but glaciers and icebergs were melting, causing sea levels to rise.

“During the winter months, we have these higher precipitation events where it’s raining, and the ground can’t seep into the water fast enough,” she said. “What happens is you have flash flooding and flooding in general. This is why our campground is flooded with water and needs to be relocated.

She said activities in the watershed impact the coastline, so they clean up inland and along the coast.

She said California Coastal Cleanup Day is the largest volunteer event in the United States and is a national event.

“I’m from Cape Town, South Africa, and I did this at home,” she said. “The whole world is involved now, and ultimately we’re using factsheets and collecting data on what people are picking up, so we can change policies.”

“This year we even found that the microplastics problem was so big that microplastics were found in human blood, which is shocking,” she said. “That’s why we’re bringing everyone together, so we can tackle the threat of plastics on people.”

She said the Big Pacific Trash Patch in the ocean is where the current collects all the plastics. 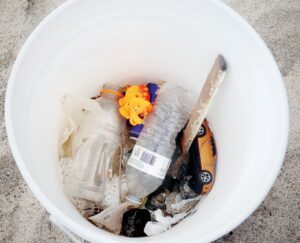 “What we’re trying to do is tackle plastic pollution locally, but promote advocacy to solve plastic problems and help animals stay out of the trash” , Meneghan said.

Everyone gets gloves, she said, and first aid is available, so safety is a big priority.

“We also have a sharps container for anything of that nature,” she said. “Ordinary waste disposal goes to the landfill.”

Meneghan has two children, aged 1.5 and 3.5, and she wants them to be safe at the beach.

“I want them to have a degree of stewardship for the local waterway and coastline,” she said. “You only have an appreciation for things if you are exposed to them.”

Miguel was busy filling his collection bucket and doing what he could.

“We need the ocean, the water, and we need these animals,” he said. “I volunteer when I can.”

Ann Bull and Earl Arnold own a house in Oxnard and live near the beach. 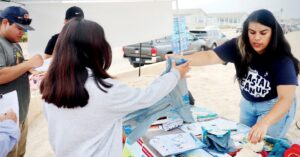 “It’s our local beach,” she said. “I have several pieces of what’s called single-use plastic, and it’s really not breaking down. There are a lot of bottle caps and plastic bottles. All I found this morning, they are cigarette butts.

She is a community member and wants to keep plastics and glass out of the ocean.

“Keep them away from our beaches, definitely,” she said. “It’s where people come as a community to spend time with our families, bird watching and surf fishing.”

She appreciates the Friends of the Santa Clara River and said someone needs to organize, sponsor and join.

“That’s one of the great things about Friends of the Santa Clara River,” she said.

Arnold said taking care of the coastline was essential.

“It’s part of the environmental impact,” he said. “I am also a member of a local fly fishing club and we support each other.”

For more information about Friends of the Santa Clara River, visit fscr.org.

What to be thankful for in Delaware

Thanksgiving is a time to reflect on the many things we need to be thankful for. Whatever your personal situation, you can be grateful that you live in the greatest nation this planet has ever known. We always elect our government with one person, one voice, and we always have the freedom to reach the […]

Small businesses can now rent retail space at Walmart stores across the country. Through a new partnership with pop-up store marketplace platform Popable, Walmart is now offering short-term leases to small businesses that don’t want to commit to longer contracts. More footwear news Here’s how it works: After a business lists its offer on Popable’s […]

Updates on the global economy Sign up for myFT Daily Digest to be the first to know about global economic news. Hello. This article is an on-site version of our FirstFT newsletter. Subscribe to our Asia, Europe / Africa or Americas edition to receive it straight to your inbox every morning of the week. You […]